Competitive BBQ is Heating Up with Peach Paper 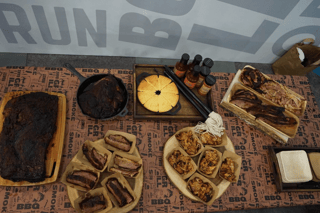 Thanks to shows like BBQ Pitmasters, BBQ Crawl and BBQ with Franklin, competitive barbecue has become a staple of pop culture. In fact, it’s turned into something of a spectator sport as once-unknown aficionados like Aaron Franklin, Jess Pryles, Chris Lilly, and the legendary Mueller family, have become household names.

In addition to attracting some of the biggest culinary names, competitions are viewed by many as the holy grail of barbecue technique and knowledge. Contests that used to primarily judge the best sauces have turned into masterfully crafted displays of every cut of meat you could possibly marinate, mop, smoke, or grill. No doubt the competitive barbecue industry is hot —  and it will continue to grow.

There are too many annual competitions in the U.S. to count these days, thanks in large part to the growth of the Kansas City Barbeque Society. Formed in 1985 by Carolyn and Gary Wells and Rick Welch, KCBS is the world's largest organization of barbecue and grilling enthusiasts, with over 20,000 members worldwide. KCBS alone sanctions more than 500 contests across the globe.

And here in the U.S., competition is no longer the elite domain of KCBS or “typical” barbecue hotspots like Kansas City and Texas. Now, perfecting the art of barbecue is anyone’s game, with cities across the U.S. making a name for themselves. Memphis and Nashville, Tennessee; Atlanta, Georgia; Gainesville, Florida; Greenville, South Carolina; Richmond, Virginia or Bethesda, Maryland — there’s no telling where the best barbecue fare may show up.

Competitive barbecue is making serious inroads outside of the U.S., too with the help of barbecue celebs like Jess Pryles. The self-proclaimed “hardcore carnivore,” and bourbon lover prides herself on helping to “spread the gospel down under,” by co-founding the Australasian Barbecue Alliance.

Tricks of the trade

While not all barbecue enthusiasts can master their craft to the level of Pryles or Franklin, they can certainly employ their tools and tricks of the trade — whether it’s a Little Green Egg, or a particular meat seasoning — to improve their own barbecue fare.

One extremely popular tool is pink butcher paper. Pink paper, also known as peach paper, has become synonymous with delicious Texas barbecue ever since Aaron Franklin began using it at his Austin restaurant, Franklin Barbecue, where people wait in line for upwards of six hours to sink their teeth into his world-famous smoked brisket.

Franklin credits the paper for its ability to keep meat moist while still retaining the delicious bark that’s achieved only by hours of TLC throughout the smoking process. The paper works better than foil because it provides superior holdout. Pink butcher paper is also FDA-approved, making it perfectly safe for food handling, cooking and storage.

Oren International supplies pink butcher paper in both rolls and sheets, to meet the needs of commercial barbecue operations and backyard enthusiasts alike.

If you’re already using pink butcher paper and you’re looking for some additional tools and resources to help you up your competitive game, check out BBQ Industry, where you’ll find all the latest on everything barbecue.

From the largest events sponsored by organizations like KCBS, to the friendly neighborhood rivalries that take place on any given summer weekend, there’s no question that competitive barbecue is alive and well.