Why is Pink Butcher Paper the Best Choice for Barbecue? 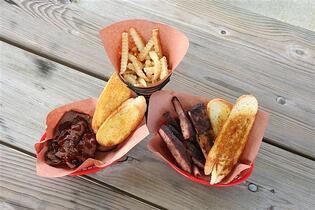 Barbecue is as much art as it is skill. It's not just the act of throwing some ribs on the grill. It's the act of transforming a slab of raw meat into a delectable feast for the senses. And true barbecue artisans take it very seriously.

A few years ago, one of those artisans, a restaurant owner and barbecue aficionado by the name of Aaron Franklin began making entertaining and informative videos and posting them on his channel on YouTube.

One particularly popular series of videos described in detail how Franklin prepares and barbecues a beef brisket. Along the way, over 360,000 viewers watched him wrap the brisket in pink butcher paper for the last several hours in the smoker and a legend was born.

Though Franklin notes that a lot of barbecuers will use aluminum foil for this purpose, he considers this “the Texas crutch” and prefers to use butcher paper instead. When the question started coming up as to what kind of paper he uses and how he came upon it, his answer was simple. As far as he was concerned, it was just regular pink butcher paper that he'd always used.

“I don't know what else you would use.” he noted, leaving many of his fans in the dark.

But, as the largest nationwide provider of the CounterKraft brand FDA-approved pink butcher paper Aaron Franklin uses, we know exactly what makes it so special!

While pink butcher paper might sound like a basic option for grilling or smoking meat, it’s clear that it is the best choice for delicious barbecue. If you are ready to take advantage of all that pink butcher paper has to offer, contact us now to place an order! For barbecue tips straight from the pros, get our guide, BBQ Secrets Revealed: 4 BBQ Experts Share Their Tips for Using Pink Butcher Paper